The Decoy Effect - A Modern Way of Selling 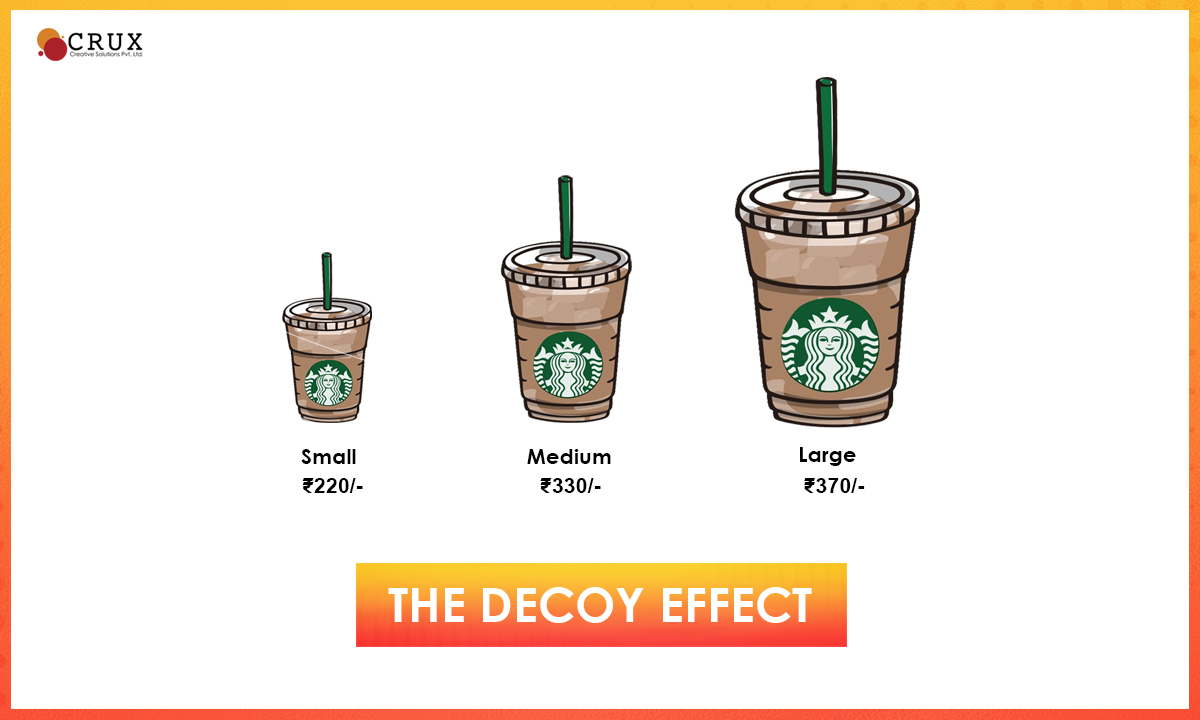 Ever wondered what that medium cup of Starbucks Frappuccino is for. When you could opt for a small one or a large one in an extreme case scenario, what on earth would you do with a medium version.

Imagine that you're lined up to buy the drink. You're pretty thirsty and need something to soothe you up. You decide to get a medium-sized bag. When you get to the concession stand, you see the small cost of 220; the medium is 330, and the big one is 370. You don't even need a big cup, but you end up getting it anyway because it's a much better price than the medium. Congratulations, you've just experienced the decoy effect.

The decoy effect explains how, when deciding between two options, the inclusion of a third, less desirable option (decoy) will affect our interpretation of the initial two choices. Decoys are "asymmetrically dominated": they are inferior to one choice (target) but only slightly inferior to the other (the competitor). For this explanation, the decoy effect is often referred to as the "asymmetrical predominance effect." .

The decoy effect will make us waste and eat more than we need. When there is a decoy alternative, we prefer to make decisions based less on which option better suits our needs and more on what we consider is the most beneficial alternative.

Unfortunately, trusting our instincts doesn't necessarily mean that we make the smartest option. Much of the time, the decoy effect drives one to choose a more expensive solution than we would have had otherwise.

At Crux we believe you should add the result to your marketing, which may help you boost the profitability and sales of those goods. Being one of the best creative agency out there, we understand the thought process of clients. We first recommend to know what you intend to sell one of. This is the "goal" of the product. Then you can build an alternative that is worse than that, but not worse than all the alternatives. Imagine that you want to maximize the proportion of your consumers selecting the Professional choice instead of the Basic option. A Professional subscription option is the goal offering. You might apply a decoy to the spread of the package that makes the Professional subscription look more valuable. So, for example, you would want to add a "Professional Lite" subscription.

Decoys is a widely used tactic by companies and firms to "encourage" us to consume more than we need. Over time, this will lead to a significant impact on our pockets and even on our welfare. Phones, laptops, food and beverages and almost everything that allows a buyer to choose between multiple options are directly or indirectly responsible for a successful decoy effect. Each buyer is targeted, and each target is achieved.

The crux of the decoy effect is that the decoy must be asymmetrically occupied by the goal and the opponent, concerning at least two properties named let's them A and B. This means that the goal is scored higher than the decoy on both A and B, while the opponent may be better on A but worse on B

Let's go back to the beverage example above. In this case, we, the buyer, are weighing our choices based on two factors: size and price. The big cup is the goal, and the little one is the opponent.

The medium cup is a decoy since it is asymmetrically occupied by the other two. Although it is larger than the small one, it is also more costly, rendering it only slightly superior. The big one, though, contains more beverage and is only marginally more costly than the medium, making it less expensive per unit.

Your particular way of thought plays a part in how likely the decoy effect influences you. One analysis involving more than 600 participants showed that the people most affected by decoy were those who appeared to rely on intuitive reasoning.

To prevent the decoy effect, concentrate on purchasing as many as you need, and explain in advance what features are most relevant to you. People who are intuitive thinkers can be more vulnerable to decoy