What does the history of animation have to do with a dinosaur?

What does the history of animation have to do with a dinosaur? 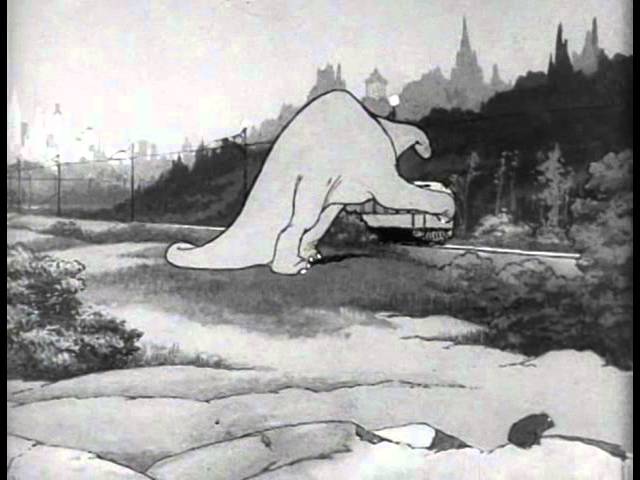 Windsor McCay created the Gertie the Dinosaur in 1914. With the help of numerous drawings he brought her to life on a canvas. He interacted with the greedy dinosaur lady and created the first real cartoon movie by the way. What was a small trampled step for his brontosaur was a big step in the history of animation. McCay thus marked the commercial breakthrough of the genre.

From dinosaur to mouse: Walt Disney

The Walt Disney films are well known to everyone. With his Mickey Mouse, Disney brought a golden age to animation. His narrative talent and the technical advancements and inventions of the Disney Studios brought the animated film far into the 60’s. Little by little he added sound and color in his movies and produced 1937 with “Snow White and the Seven Dwarfs” the first full-length animated film. This was followed by “Pinocchio”, “Bambi” and “Cinderella”, which still belong to the best known animated films today.

The manual work is replaced piece by piece

The cartoon is a form of 2D animation, the animation on the plane. The possibilities for the draughtsman are almost limitless. They can develop very detailed and realistic figures or create imaginative and abstract creatures. You can override laws of nature, animals get voices, objects get faces – there are no limits to creativity.

Behind it there are a lot of hand-drawn sketches, one for each phase of movement. In order not to have to draw the background every time anew, the characters were drawn on slides. These were then placed on the appropriate background and each individual sketch was photographed. Only in the 90’s this procedure was at least partly replaced by the computer. The key scenes of the chief draughtsman were scanned and then digitally colored and combined with the background.

The third dimension – with stop-motion technology into space

The stop-motion technique was already used in the two-dimensional animated films: movements are generated by the sequencing of individual images. But this also works with three-dimensional elements. Objects such as dolls, Lego bricks or model vehicles can always be moved and photographed piece by piece. In the finished film, this appears like a fluid movement. Kneading models made of plasticine can be created for figures. This is how Nick Park’s “Wallace & Gromit” was created. In real films, this technique was used to animate monsters, such as the giant monkey in “King Kong and the White Woman”.

John Lasseter created with the movie “Toy Story” in 1995 a milestone in 3D computer animation. It was the first film to be produced exclusively with computers. For the whole film 100 computers produced about 110’000 single frames. The fact that the movements at that time still seemed a bit robot-like and not yet quite fluid, doesn’t attract any negative attention when selecting the toy as the main character. In the meantime, the technology has been perfected to such an extent that even humans and hairy animals can be animated realistically with the computer.

To know more about animated video ideas and want to create one. Reach out to us we at “Crux Creative Solutions” are No. 1 animated business video production in India for providing world class animated videos to the clients. Call us on +91-124-4207905 or contact us here.